It all started with the Cocoa Brownies on In A Southern Kitchen!  As soon as I read her post, I pulled together everything to make the brownies. Imagining that the calories I burned while pulling the ingredients together would compensate for the fat and calories, I moved forward with the addition of cream cheese.  With or without the cheesecake filling, the brownies are heavenly!

That would have been okay but, Cherie over at Cherie’s Stolen Recipes made something called Fried Ladyfish...It’s fish that’s seasoned with ginger-garlic paste, turmeric, & chilli powder.  The fish is then coated with Semolina and fried in Coconut Oil.  I couldn’t get past it and decided to make it with Gulf Shrimp.  I had it for lunch today with lemon garlic mayo and there is no adjective to describe the wonderful! 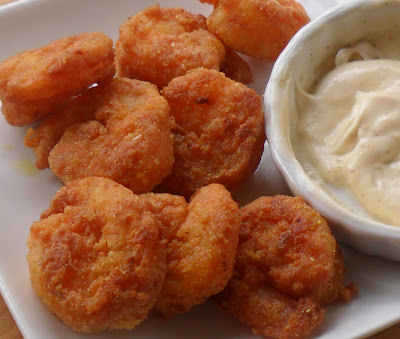 I will be making the Sausage & Egg Casserole from Served Up With Love this week(How can I resist? It has a crescent roll crust!), and the tomorrow being pizza night, I just have to make Sinful Sunday’s BBQ Chicken Pizza.

In all seriousness, this is one of the most fun things about blogging.  Not only do you get to share your recipes and stories, you get to experience other blogger’s dishes.  With as many cookbooks as I own, the community of blogger’s recipes is fast becoming my favorite.

This has not been the week for effective dieting but, I’m loving it!

Oh…recipe for the cheesecake filling?

Preheat oven to 350 degrees and prepare the brownie batter as directed in Lucy’s recipe.  In a bowl, cream the softened cream cheese and sugar until no lumps appear. Add egg, beating well.  Stir in sour cream and vanilla extract until well blended.
Spread about 2/3 of the brownie batter in a prepared pan(follow Lucy’s instructions).  Pour cheesecake batter over brownie batter and tilt pan, allowing it to completely cover the brownie layer.  Use a tablespoon to randomly drop remaining brownie batter over the cheese cake layer.  Run through with knife, making figure eights, to create a marbled effect.  Bake for 35 minutes.